Cast iron has developed a reputation, and with good right, for being well-made and durable. Chances are that you remember the cast iron skillet that one of your elder family members used to cook with.

Add the way that there are articles all over the place about the problem chemicals that are occasionally found in nonstick coated pans, and a cast iron skillet seems like a no-brainer.

The question remains, what is the best cast iron skillet that your wallet can handle and how do you know what to buy?

Are Pre-Seasoned Coatings Worth the Cost?

The answer to this question is a little bit yes, and a little bit not so much. Seasoning is vital for a cast iron skillet because a properly seasoned skillet will be nonstick.

Seasoning refers to a hardened coat of built-up fats that create a naturally nonstick surface upon cooking. Pre-seasoned means that you’ll get a factory-seasoned skillet that basically gives you a jumping off point, but you’ll need to keep up with the seasoning once you get it home.

Regardless of the skillet you purchase, you’re going to need to keep up with keeping it seasoned and cared for correctly.

The bottom line for this is that pre-seasoned skillets give you the possibility of cooking right away while continuing to season on a regular basis. A skillet that is not pre-seasoned means that you’ll have to season it first. It’s really a matter of time and convenience when you buy it, so you will need to consider what works best for you.

How Do You Clean a Cast Iron Skillet?

When you start thinking about cast iron, you’re going to hear a lot of things to avoid. You’re not supposed to use soap, steel wool, or a dishwasher. It’s enough to make you ask, “But how do you clean it?”

First and foremost, you need to make sure you clean it as soon as you’re done with it. That means if you take too long after and let it cool, it will be more difficult to clean. You also don’t want to soak it because it’s more likely to rust.

You’ll need a sponge or stiff brush along with a clean and dry cloth. Paper towels will also work. Don’t forget to also have vegetable oil or shortening on hand.

You’re going to wash the skillet with hot water and either the sponge or brush. The reason you don’t want to use soap is because it will remove the seasoning that you’ve worked so hard to build.

If you have bits that are stuck to the pan, you can add some coarse salt to the pan with a little water and use it to scrub the skillet clean.

Once you’re done, rinse it with water and dry it with a cloth or paper towel. Be sure to dry the skillet thoroughly to prevent rusting.

After the skillet is completely dry, coat the inside with a layer of oil or shortening. Rub it in with a cloth or paper towel and be sure to remove any excess oil that is left behind.

Always be sure to store your cast iron skillet in a dry place like a cabinet or your pantry. If you keep it outside in your garage among your camping gear, be sure you give the skillet a good cleaning before you use it again.

Is There a Difference in Skillet Design?

Yes, there is a difference in the way skillets are designed, although some of the variations may be more subtle.

Different skillets may have a variety of weight with some being on the lighter side while others are markedly heavier.

You’ll also notice that some skillets do not have a handle on the side opposite the main handle. The size and weight of the skillet may help you decide whether or not you need the helper handle.

Spouts are also not a standard part of a cast iron skillet. Some have spouts which make it easier for you to pour out the contents and others do not. You’ll need to decide if that’s an important factor as well.

Something else to consider is the way that texture of the pan feels. Some feel rougher with an almost pebbled texture, and others are entirely smooth and feel like a more traditional pan.

The overall design that you choose is going to impact the overall performance of your skillet, so consider the points carefully, so you don’t regret your choice.

Does Cost Equal a Better Skillet?

Prices range wildly on cast iron skillets. You’ll see them for as low as around $20 to upwards of near $300 for skillets that are the exact same size.

When you get down to it, there is a common element to all of the cast iron skillets which is that they all require upkeep on a regular basis.

That means that you can absolutely go with a less expensive option and still get amazing quality that lasts just because it is made of cast iron.

You’ll likely notice that as you check out different cast iron skillets, you’ll see that some of them are much heavier than others, and it rarely has any true impact to the cost.

One of the time-honored tests to determine whether or not a cast iron skillet is ready for use is the fried egg test. Eggs are notoriously difficult to clean off a pan even if it does have a nonstick surface which is why it is one of the best for testing cast iron. 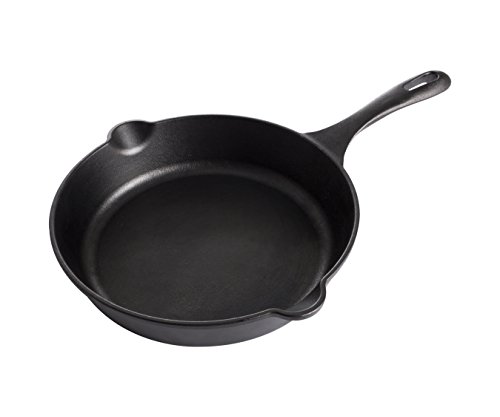 The Victoria Skillet, made in Colombia, is one of the best cast iron skillets on the market in addition to being one of the most inexpensive.

This skillet comes pre-seasoned and arrives, straight out of the box, with a perfectly egg-friendly surface. The only thing that comes into question with this skillet is the way the handle differs from other models.

The handle on the Victoria skillet is curved. Depending on who you ask, the curved handle can be useful, while others may view it as a hindrance. The helper handle on the opposite side is well-proportioned to the rest of the pan which makes the pan easy to maneuver.

Something else to note about this skillet is the pour spout. If you ever intend to have to pour grease out of it, the spout makes it so that it is easier to do so without making a mess. 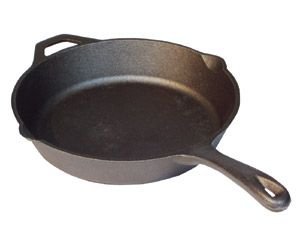 If you have been to a big-box store like Target or Walmart, you may have seen the Camp Chef line of cast iron cookware. You’ll notice that it’s quite affordable, too.

It is a standard, no frills, cast iron skillet that is very similar to the Lodge skillets you’re likely familiar with. The skillet needs one or two additional seasoning coatings, and then it will be ready for your cooking pleasure.

One of the best things about this skillet is the price. For less than $30, you can own a reliable, quality cast iron skillet. It is a little heavier weighing in at seven pounds, but it is relatively simple to maneuver, especially with the helper handle. 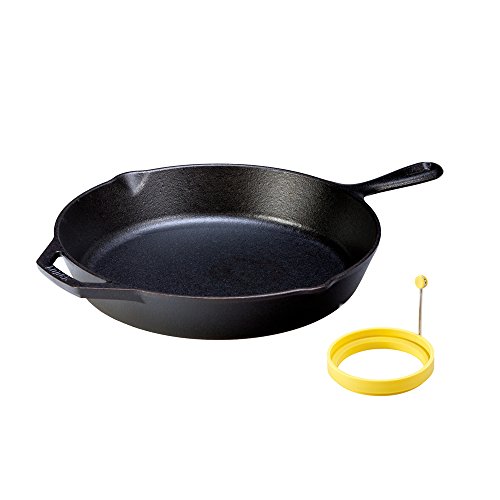 Lodge Cast Iron Skillet is often thought of the absolute best among cast iron cookware, and while it can certainly take a beating, you’ll need to be prepared to season it.

Both low-priced and durable, you can expect to season the pan at least four or five times before it becomes non-stick and perform the way you think it would.

One of the noticeable differences between the Lodge skillet and the others is the handle. It seems to be shorter than many of its peers, but that doesn’t take away too much from the quality of the product.

The Lodge skillet is also on the heavier side and weighs in at just over seven pounds. 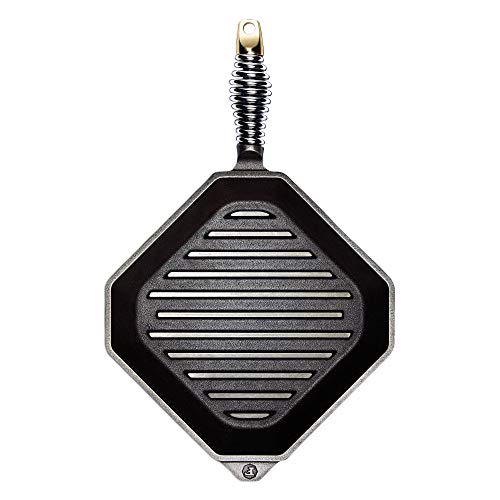 Cast iron is moving up in the world which means that you’re going to see brands that command a couple hundred dollars for a skillet. Finex Cast Iron Skillet is one of the more expensive brands, but it does do the job quite well.

Made in Oregon, these skillets are different by design. They are octagon-shaped with the claim that the shape encourages easier flipping of the contents.

Truthfully, it might look neat, but the functionality isn’t all that different from a lower-priced skillet. One thing that does, however, set this cast iron skillet apart from the others is the texture of the pan.

It is entirely smooth and will probably remind you of the skillet your grandmother used to use when she would cook up a batch of pancakes on a Saturday morning.

The smooth surface combined with pre-seasoning makes this skillet easy to use. You may or may not love the handle on this pan, too.

The handle is guarded by a stainless-steel wraparound spring to keep it from getting hot, but the size can be cumbersome if your hands are on the smaller side. 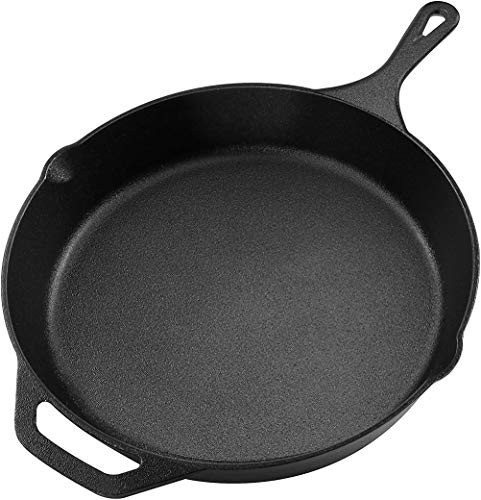 Made in China, this cast iron skillet is also one of the most inexpensive options out there on the market at just over $20 .

You will need to ensure you season it at least two or three times before the skillet starts to not stick when you cook with it.

Something that might be a deal breaker for you is the texture. The surface on this particular skillet is pretty rough. The surface itself won’t cause problems to the food, but it might give you some trouble when you’re cooking.

Because the surface is so bumpy, don’t be surprised if your spatula or other cooking utensil gets caught when you go to flip your eggs. It’s also one of the heaviest pans weighing in at eight pounds.

Cooking in a cast-iron skillet is always a great option when you’re in the kitchen. Cast iron skillets are naturally versatile as far as what you can cook in them. You can also move them from the stove to the oven and then straight to the table.

As you go through and figure out which iron skillet is going to be the next one to join your cooking arsenal, you’re going to want to remember to get answers for your questions along the way.